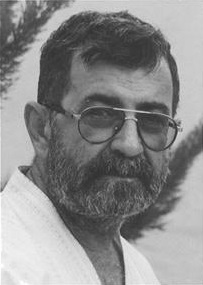 Nasr Abdel Aziz Eleyan was born in Hebron, Palestine in 1941, Nasr grew up in Palestinian refugee camps where he started painting as a child. He studied Fine Arts and Film in Moscow, Baghdad, Cairo and London. Nasr currently lives in Amman, Jordan where he teaches fine are at the University of Jordan.